Michael Frank has just completed what he considers to be the greatest project of his academic career. Frank, a journalism student and the recipient of the department's 2018 Outstanding Senior Award, conceived of, planned and staged the first ever 25 Under 25 Film Festival, featuring 25 films made by young filmmakers from across California. 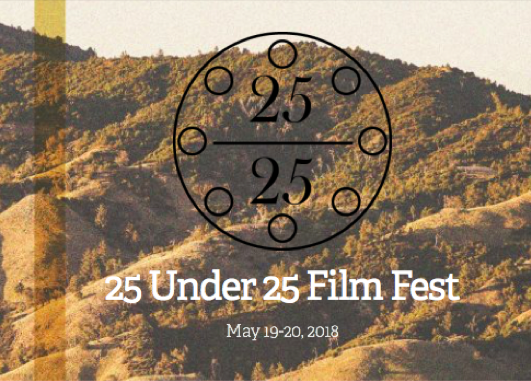 The idea came to Frank during his third year at Cal Poly when he realized the need for a platform for young filmmakers. After attending a small screening for films made by fellow Cal Poly students, Frank saw the opportunity to feature these films on a larger stage and to leave a lasting impact.

“There is value in being able to show your work to a larger audience,” Frank said. “We want to give a voice and a platform that’s just for young filmmakers.”

Frank enlisted a team of about 10 fellow students, and they began calling and emailing every school in the state that had a film department.

The result was 150 submissions from students throughout California. Of those 150 films, 25 were selected by a panel of 35 judges, based on a rubric created by Frank. Films were screened May 19-20 at San Luis Obispo’s Palm Theatre.

Soren Dickens, a filmmaker and Cal Poly student, was one of the filmmakers whose works were selected to be screened during the festival. Dickens heard about the festival through a friend and decided to submit his film, “Rivers of Recovery,” as an opportunity to gain exposure.

“To be able to showcase our work at a local festival is pretty awesome,” Dickens said. “It gives us the opportunity to build our network, expose our content and learn from other filmmakers who are pursuing the same goals that we are.”

As Frank wraps up the inaugural 25 Under 25 Film Festival, he already has big hopes for its future. The ultimate goal is that “students around California will know about it, want to be a part of it and will want to support it,” Frank said.

To find out more about the festival, visit the 25 Under 25 website.