Check out the latest accomplishments, awards and news from Journalism Department alumni.

Naythan Bryant has a new position as news producer for KGET-TV, the NBC/CW+-affiliate in Bakersfield, part of Nexstar Media Group.

Kelsey Luvisa has started a new position as Marketing Coordinator, Communications at HomeLight, a real estate referral company based in San Francisco.

Rachel Marquardt has been accepted into the MBA program at Pepperdine University.

Allie Rohlfs has started a new position as Account Coordinator at Verdin.

Samantha Spitz started her new job as reporter-anchor at KEPR-TV in the Tri-Cities, WA.

Valerie Gasparini has been promoted to account executive, healthcare and life sciences, at DocuSign in San Francisco.

Cara Benson is a social and digital media producer at Trailer Park Group, a content and entertainment marketing company. 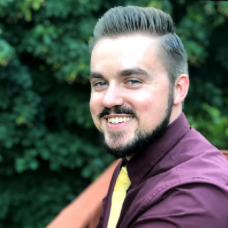 Courtney Lucas has been promoted to associate consultant at Robert Walters, a recruitment company that specializes in the technology space and helps companies find mid-senior management talent in the Los Angeles market.

Lindsay Mann has been promoted to Account Executive at InkHouse Media + Marketing.

Ayrton Ostly has started a new position as a news producer for KSBY-TV in San Luis Obispo. He was most recently a sports reporter for the Gannett/USA Today Network in Salinas, CA.

Hannah Landry (Journalism, ‘16) has started a new position as Logistics Sales Executive at ITS Logistics.

France Ricapito is now a social media assistant and member of the event staff at Queens County Farm Museum in New York.

Lauen Roberge is now a digital marketer at Oracle.

Jackie Steele has a new position as Innovation Communication and Community Manager at Danone, part of her master’s program in in International Global Communications in France.

Kristine Xu has started a new position as Project Assistant at Ziba Design in Portland, OR. She is in the MBA program in Sustainable Business Practices at the University of Oregon.

Jonathan Chodzko recently moved into a role within Major League Baseball as an Account Executive in Business Development with the Los Angeles Angels.

Abby Cavanaugh is an account executive, Technology Practice at Ketchum.

Laura Draper has started a new position as senior copywriter for ThoughtSpot, a technology company that produces business-intelligence analytics search software. The company is based in Sunnyvale, CA, with additional offices in London, Bangalore, India, Seattle and Tokyo.

Margaret Pack has been promoted to director of Mission North communications agency. She has been with the company for five years, starting as an associate in 2015.

Krista Smith has a new position as account executive with Nuffer, Smith, Tucker, a full-service public relations, communications, strategic planning, design and digital agency in San Diego. She is working with agriculture clients. Most recently, she was the online communication specialist for Cal Poly's College of Liberal Arts.

Melissa Geisler has a new position as executive producer at Sinclair Broadcast Group. She will be working in digital sports news with the network in Los Angeles. She is a member of the Journalism Advisory Board.

Carolyn Nielsen has published her first book, "Reporting on Race in a Digital Era." Nielsen, a former Mustang Daily editor and newspaper journalist in California and Washington, is now a professor in the Department of Journalism at Western Washington University in Bellingham, WA. Her book analyzes news coverage of contemporary racial inflection points beginning with the election of President Barack Obama, stretching through the birth and growth of the Black Lives Matter movement to the uprisings in Ferguson, MO, after a white police officer killed black teen Michael Brown, Jr. Her Mustang Daily adviser, the late Herb Kamm, "who taught a generation of students to love journalism" is included in her book dedication.

Keith Eldridge South Sound bureau chief for KOMO-TV News in Seattle, WA, was recently inducted into the Washington Association of Broadcasters Hall of Fame. Earlier he was inducted into the Silver Circle of the National Academy of Television Arts and Sciences (the Emmys).

Let us know what’s new with you!

Professor Emeritus Clyde Hostetter died May 16, 2020, at the age of 94. Hostetter was a professor in Cal Poly's Journalism Department from 1958 to 1983. He also served as Cal Poly’s director of communications and media productions (in the ’70s) and earlier as instruction materials program coordinator (’60s). After retiring, he served on a Cal Poly team that developed educational systems in Guatemala, Indonesia and Saudi Arabia. He lived in Tempe, AZ, with his wife, Carolyne.

Cheryl Conway (1980) passed away suddenly and unexpectedly on December 28, 2020. She was active in the San Luis Obispo County and state Democratic Party, was elected to the Fire Board and was a member of the Cayucos Advisory Committee and the local Land Use Committee. She was also a master volunteer with Woods Humane Society.