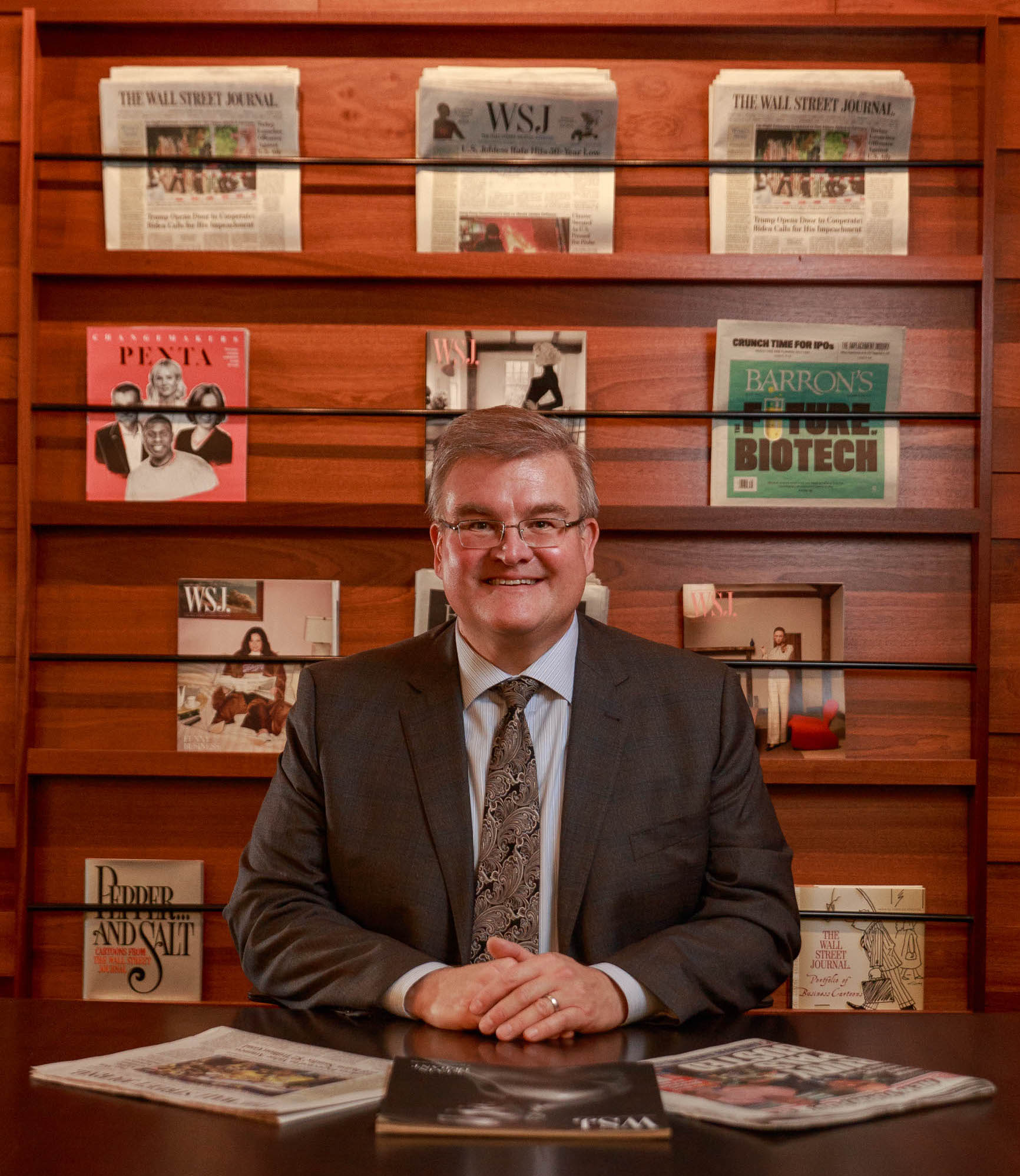 Paul Cousineau’s career in newspaper manufacturing at Dow Jones spans 35 years and many locations across the United States. He has contributed to the industry through research, development of technologies, support of college programs and students as well as providing leadership and in-depth product knowledge for Dow Jones. Paul has held various roles within operations and today he works at Dow Jones’ northeast headquarters managing prepress, continuous improvement and IT within operations.

Paul primarily works on production of Dow Jones’ printed products from receipt of image through the finished paper. He has been a key executive in developing Dow Jones’ quality control program while managing all systems and functions related to, plant expansion projects, continuous improvement, and maintaining a connection with the industry and education. He possesses an extensive knowledge of the processes of print manufacturing and is called upon by peers and industry colleagues for his counsel.

Paul has developed technologies in use today, one is the topic of a white paper published in the 2010 TAGA Proceedings, "Use of Ink Modeling and Volumetric Equations for Closed Loop Control of Optical Density in Cold-set Newspaper Applications". During his career, he has implemented many improvements in technology and processes. In 2018 he was awarded a patent for “systems and methods for variable data publication..

His connection to industry includes serving as Vice Chair and Research Committee chair for Printing Industries of America. In the past he was chair of the Newspaper Association of America Technical Committee and worked with the Specifications for Newspaper Advertising Production (SNAP) Committee to establish ANSI CGATS/SNAP TR 002-2007 as the North American newspaper printing standard.

A graduate of California Polytechnic University San Luis Obispo, Paul is immediate past chair of the Graphic Communication Department Advisory Board and a past chair of the Journalism Department Advisory Board. He worked with the Dow Jones Foundation to fund lab improvements in 2011 at Cal Poly. He works to fund the various endowments required to increase financial support for the departments, faculty and students. As a board member of TAGA, Paul ensures the student program continues. He helped architect the non-profit incorporation change in 2012 to secure TAGA’s future with Printing Industries of America.

Paul assists his community through Lions Clubs International serving in local club activities, as treasurer for the 16J Foundation Board and with New Jersey Lions as Finance and Operations chair. He is a progressive Melvin Jones Fellow and is a recipient of the 2015 President’s medal. Interesting tidbit: In 2012 one of Paul’s photos, “Squirrelling Around” was published in the Lions International Environmental Calendar.

Paul started at the age of ten as a paperboy for The San Gabriel Tribune. As a freshman in high school, he attended night school to learn printing and took a job at a small print shop in Irwindale. Paul earned the Eagle Scout rank. As an applied physics major at the University of California Irvine, he was production manager for UCI’s New University newspaper.

Paul transferred to Cal Poly where he worked at University Graphic Systems producing Mustang Daily newspaper. He chartered the first TAGA student chapter that produced technical journals shared at the annual technical conference. In 1985, he graduated with a Bachelor of Science in Graphic Communication and Print Management as Most Outstanding Student. He was later recognized in 2009 as an Honored Alumnus of Cal Poly, and in 2016 he was a recipient of the Michael H. Bruno Award recognizing outstanding contributions to the print education and industry.